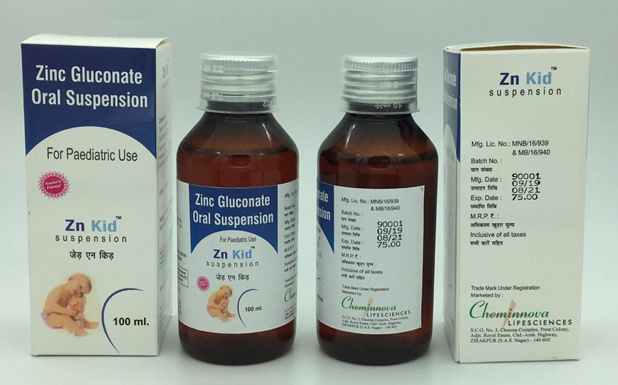 Zinc gluconate is mainly indicated in conditions like zinc deficiency, and can also be administered in adjunctive therapy as an alternative drug of choice in diarrhea.

The mechanism of action is not completely known, zinc supplementation may be used to increase immunity against viruses or may interfere with the replication of certain viruses, such as the human papillomavirus (HPV).

Absorption; Median (IQR) fractional absorption of zinc from zinc citrate was 61.3% (56.6–71.0) and was not different from that from zinc gluconate with 60.9% (50.6–71.7). The more insoluble zinc oxide is less well absorbed when given as a supplement without food and may be minimally absorbed by some individuals.
Distribution; Stored primarily in skeletal muscle and bone.

Zinc is an important mineral found in almost every cell in the human body. It promotes the activity of about 100 enzymes. Zinc deficiency is often associated with an increased risk of infection. When they are used to treat the common cold, zinc supplements may interfere with rhinovirus cleavage or adhesion and may play a role in protecting plasma membranes from microbial toxins and complement.

No known contraindications. Accumulation of zinc may occur in cases of renal failure. Overdosing can lead to zinc toxicity.
Pregnancy:Contact your doctor before taking this.