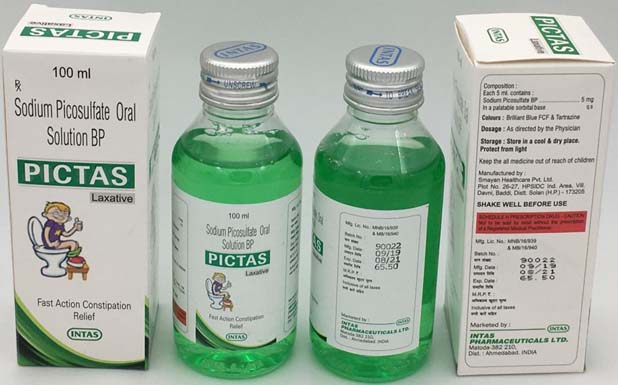 Each 5 ml contains:
Sodium Picosulfate 5 mg
Sodium picosulfate is in a class of medications called stimulant laxatives. Sodium picosulfate solution is used to clean out the intestines before surgery or certain procedures (such as colonoscopy, X-rays). It is a laxative that works by drawing large amounts of water into your intestines and stimulating the colon. This causes watery bowel movements (diarrhea).
Indicated for cleansing of the colon as a preparation for colonoscopy in adults. It is used as a treatment for constipation or to prepare the large bowel before colonoscopy or surgery.

sodium picosulfate, is a contact laxative. Sodium picosulfate inhibits the absorption of water and electrolytes, and increases their secretion into the intestinal lumen . It is hydrolyzed by colonic bacterial enzyme, sulfatase , to form an active metabolite bis-(p-hydroxy-phenyl)-pyridyl-2-methane (BHPM), which acts directly on the colonic mucosa to stimulate colonic peristalsis. This compound is a stimulant laxative and increases peristalsis in the gut.

Sodium picosulfate is a stimulant laxative that in conjunction with magnesium citrate, produces a purgative effect on stools. In a multicentre, observational study comprising of patients undergoing colonoscopy, more than 93.0% of the patients receiving sodium picosulfate-containing preparations reported the colon cleansing effect to be effective.