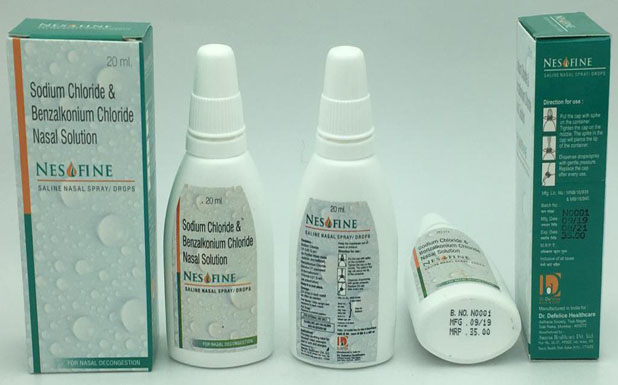 This intravenous solution is indicated for use in adults and pediatric patients as a source of electrolytes and water for hydration. Also, designed for use as a diluent and delivery system for intermittent intravenous administration of compatible drug additives.
When used as an active ingredient in products like antibacterial, antiseptic, or disinfectant soaps, topical sanitizers, or cleaning agents, benzalkonium is primarily implemented in its salt form, benzalkonium chloride, where it may often be the only active ingredient present and indicated for the primary purpose of topical washing to decrease bacteria on skin 2. Conversely, when implemented as an excipient ingredient in a variety of multidose aqueous nose, eye, or ear products, benzalkonium chloride is being used as the antimicrobial preservative of choice to facilitate effective bactericidal and fungicidal actions to help minimize the growth of unwanted organisms in the multidose containers

Sodium chloride — major electrolytes of the fluid compartment outside of cells (i.e., extracellular) — work together to control extracellular volume and blood pressure. Disturbances in sodium concentrations in the extracellular fluid are associated with disorders of water balance. Benzalkonium chloride: not entirely elucidated, the bactericidal action of benzalkonium chloride is believed to be due to the disruption of intermolecular interactions. Such disruption can cause the dissociation of cellular membrane lipid bilayers of bacteria, resulting in compromised cellular permeability control and the leakage of important cellular contents, a variety of critical intermolecular interactions and tertiary structures in very highly specific biochemical systems that allow bacterial agents to function normally can be readily disrupted or deactivated by cationic surfactants like benzalkonium.

Sodium chloride:Sodium the major cation of the extracellular fluid, functions primarily in the control of water distribution, fluid balance, and osmotic pressure of body fluids. Sodium is also associated with chloride and bicarbonate in the regulation of the acid-base equilibrium of body fluid. Chloride, the major extracellular anion, closely follows the metabolism of sodium, and changes in the acid-base balance of the body are reflected by changes in the chloride concentration.
Benzalkonium chloride solutions are generally categorized as biocidal agents with relative long durations of action. Their spectrum of activity has been demonstrated against bacteria, to some viruses, fungi, and protozoa , although bacterial spores are treated as being resistant to the agent. Finally, solutions of benzalkonium chloride are bacteriostatic or bactericidal based on their concentration. Bacteriostatic agents act to prevent further growth of bacterial organisms that are present while bactericidal agents function to kill bacteria that are present . In general, the activity of the agent is not largely affected by pH, but such activity does increase substantially at higher temperatures and prolonged exposure times.

Sodium chloride:
Absorption: of sodium in the small intestine plays an important role in the absorption of chloride, amino acids, glucose, and water. Chloride, in the form of hydrochloric acid (HCl), is also an important component of gastric juice, which aids the digestion and absorption of many nutrients. The volume of distribution is 0.64 L/kg
Eliminaion: Substantially excreted by the kidneys.

Benzalkonium chloride: Absorption: benzalkonium chloride absorption was evaluated in women using tampons containing the agent. Venous blood samples were drawn 15 minutes before the tampon application and then again at 15 min, 1 h, 3 h, and 24 h after application. Benzalkonium chloride was not detected in any of the blood samples at any time tested.  the excipients will only ever be present at the minimal levels necessary to maintain the integrity of the product substance.
Metabolism:benzalkonium chloride is structurally a large, positively charged molecule it is likely poorly absorbed and eliminated largely in faeces, similar to other quaternary ammonium compounds
Elimination: Administered benzalkonium chloride is likely eliminated largely in faeces, similar to other quaternary ammonium compounds
contraindicated in patients with congestive heart failure, severe renal impairment, conditions of sodium retention, oedema, liver cirrhosis.
Pregnant:Contact your doctor before taking this.
Though very rare but some of the reported side-effects of this include: