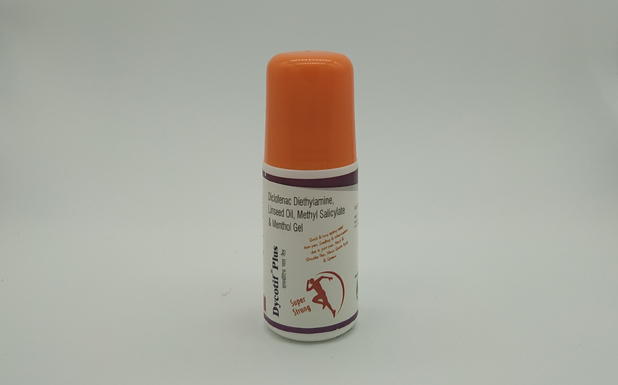 Each roll on contains:
Benzyl Alcohol 1.00% w/w + Diclofenac Diethylamine 1.16% w/w (Eq. to Diclofenac Sodium 1.00% w/w) + Linseed Oil 3% w/w + Menthol 0.5% w/w + Methyl Salicylate 10% w/w
This Composition is a unique quick absorb formula which gets quickly and completely absorbed into the skin to give quicker, better and longer lasting relief. Diclofenac gel spreads easily and quickly disappears to give real pain relief. It also gives a unique cooling sensation, moderate enough so that there is no feeling of burning after applying it. Diclofenac sodium and methyl salicylate are non-steroidal anti inflammatory drugs based on the ability to inhibit synthesis of prostaglandins. When used locally, Diclofenac and methyl salicylate are rapidly absorbed, penetrate into the subcutaneous fat, muscular tissue and joint capsule, reduce pain and inflammation in the joints, morning stiffness and swelling of joints, facilitate increase in the extent of movements. The main component of linseed oil is α-linolenic acid which has an anti-inflammatory action. Menthol induces irritation of nerve endings and has a local distracting and mild analgesic action, besides inducing a cooling sensation.

This Gel (Diclofenac sodium gel) is indicated for the relief for Lower back pain, sprains and strains, muscular pain.

After cutaneous application of Diclofenac Sodium Gel a rapid onset of Diclofenac absorption can be observed leading to measurable plasma levels as early as 30 minutes. The achieved systemic concentrations of diclofenac are about 50 times lower than those achieved following oral administration of equivalent amounts of diclofenac.