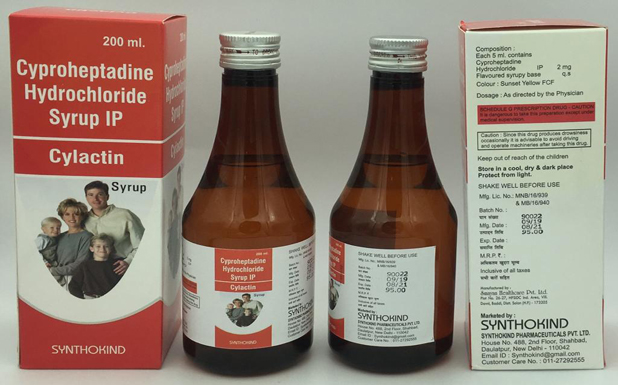 Each 5 ml contains:
Cyproheptadine HCl 2 mg
Cyproheptadine is an antihistamine used to relieve allergy symptoms such as watery eyes, runny nose, itching eyes/nose, sneezing, hives, and itching. It works by blocking a certain natural substance (histamine) that your body makes during an allergic reaction.A serotonin antagonist and a histamine H1 blocker used as antipruritic, appetite stimulant, antiallergic, and for the post-gastrectomy dumping syndrome.
For treatment of perennial and seasonal allergic rhinitis, vasomotor rhinitis, allergic conjunctivitis due to inhalant allergens and foods, mild uncomplicated allergic skin manifestations of urticaria and angioedema, amelioration of allergic reactions to blood or plasma, cold urticaria, dermatographism, and as therapy for anaphylactic reactions adjunctive to epinephrine.

Absorption: Well absorbed after oral administration.
Metabolism: Hepatic (cytochrome P-450 system) and some renal
Elimination: After a single 4 mg oral dose of14C-labelled cyproheptadine HCl in normal subjects, given as tablets 2% to 20% of the radioactivity was excreted in the stools. At least 40% of the administered radioactivity was excreted in the urine

Cyproheptadine is a piperidine antihistamine. Unlike other antihistamines, this drug also antagonizes serotonin receptors. This action makes Cyproheptadine useful in conditions such as vascular headache and anorexia. It does not prevent the release of histamine but rather competes with free histamine for binding at HA-receptor sites. It competitively antagonizes the effects of histamine on HA-receptors in the GI tract, uterus, large blood vessels, and bronchial smooth muscle. Most antihistamines possess significant anticholinergic properties, but it exerts only weak anticholinergic actions. Blockade of central muscarinic receptors appears to account for Cyproheptadine's antiemetic effects, although the exact mechanism is unknown. It also competes with serotonin at receptor sites in smooth muscle in the intestines and other locations. Antagonism of serotonin on the appetite center of the hypothalamus may account for Cyproheptadine's ability to stimulate appetite. Cyproheptadine also has been used to counter vascular headaches, which many believe are caused by changes in serotonin activity.

Use is contraindicated in patients with bladder obstruction, stenosing peptic ulcer disease, pyloroduodenal GI obstruction, and symptomatic prostatic hypertrophy.
Pregnant: Contact your doctor before taking this.