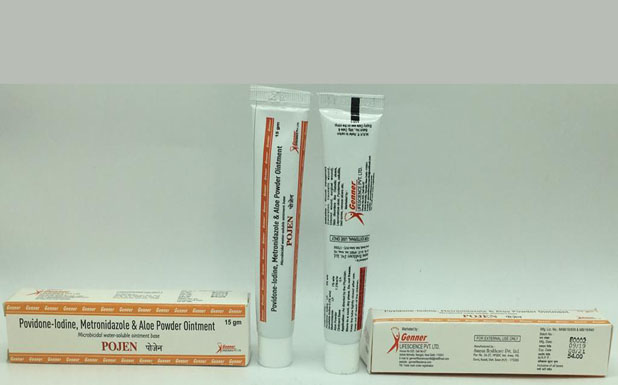 The combination is external broad microbicidal spectrum antiseptic mainly used to treat and prevent topical infections caused by microorganisms including Staphylococcus aureus and Candida albicans. The combination contains metronidazole, a nitroimidazole antibiotic which destroys cell DNA, Povidone Iodine which oxidises biomolecules in the cell and aloe powder which soothen’s the skin and prevent further growth of microorganisms.
Povidone Iodine: It is a microbicidal and iodophore antiseptics complex which releases iodine as a highly reactive compound works as strong oxidising agent leading to denaturation of proteins. It reacts with functional group of amino acids and makes them improper for use. Iodine also reacts with nucleotides and fatty acids required for the growth of cell and ultimately lead to cell death.
Metronidazole: It is classified as nitroimidazole derivative and shows microbicidal action specifically against some anaerobic bacteria’s and protozoa. It passes inside the cell by simple diffusion where it is activated by reducing nitro group with the help of certain proteins only present in anaerobes producing radical which destroys cell DNA and ultimately leads to cell death.
Aloe Vera Powder: Aloe Vera shows anti-inflammatory and analgesic properties that can help to alleviate skin problems like psoriasis, itchy rashes, sunburn, and dryness. The polysaccharides found in aloe vera powder even encourage regeneration of skin tissue.
Medication should only be used as instructed and prescribed by your physician.
FOR TOPICAL USE ONLY