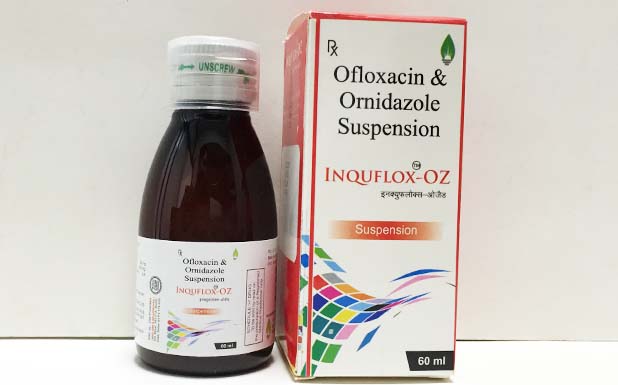 Each 5 ml suspension contains:
Ofloxacin 50 mg
Ornidazole 125 mg
Ofloxacin is a quinolone antibiotic used for treating certain kinds of bacterial infections(ear infections, urinary tract infections) and also useful in pelvic inflammatory disease (PID). It belongs to the fluoroquinolone class of antibiotics. Ofloxacin stops the multiplication of bacteria by inhibiting the reproduction and repair of their genetic material (DNA).
Ornidazole is a nitroimidazole which is an antibacterial and antiprotozoal drug used to treat anaerobic enteric protozoa. It is a drug that cures some protozoan infections like (Giardiasis, Trichomoniasis). This antibacterial agent effective against a wide variety of gram-negative and gram-positive aerobic bacteria.
It has been demonstrated by recent studies concomitant administration of an antibiotic (Ofloxacin) and antiprotozoal (Ornidazole), shows better symptoms relief compared with the modest improvement of infections with each of the treatments.

Ofloxacin:
● On therapy for the treatment of patients ofloxacin suspension help to cure Mild to moderate infection due to susceptible strains of designated microorganisms.
● It is used to treat certain prostate infections and sexually transmitted infections.

Ornidazole:
● Trichomoniasis of uro-genital tract and bacterial vaginosis.
● Ornidazole suspension is Used in the treatment and prophylaxis of susceptible anaerobic infections in dental and gastrointestinal surgery.

Ofloxacin:
Inhibits the enzyme Bacterial DNA gyrase. It has activity against C.trachomatis, M.leprae, M.tuberculosis and other Mycobacterium spp.

Ornidazole:
The antimicrobial activity of ornidazole is due to the reduction of the nitro group to a more reactive amine that attacks microbial DNA, brings about loss of helical structure of DNA and subsequent DNA breakage thus inhibiting further synthesis and causing degradation of existing DNA.