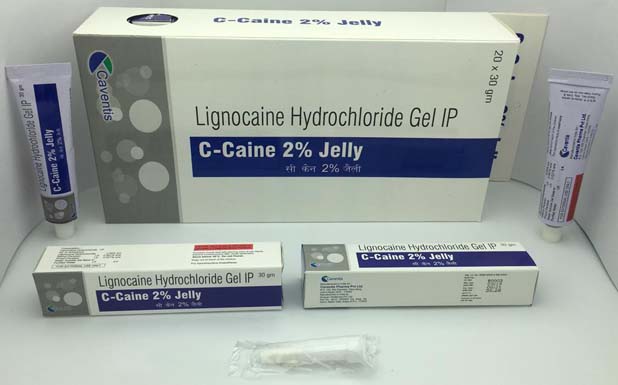 Each gel contains:
Lignocaine Hydrochloride Gel IP 2% w/w
This medication is used on the skin to stop itching and pain from certain skin conditions e.g., scrapes, minor burns, eczema, insect bites and to treat minor discomfort and itching caused by hemorrhoids and certain other problems of the genital/anal area such as  anal fissures, itching around the vagina/rectum). Lidocaine is a local anesthetic that works by causing temporary numbness/loss of feeling in the skin and mucous membranes.
Lignocaine Hydrochloride Gel is an anaesthetic gel used as a lubricant for the insertion of instruments for medical procedures, such as catheters, and for the treatment of symptoms of painful inflammation of the urethra and bladder.It is also used to numb the lining of the mouth, throat, or nose before certain medical procedures (such as intubation).

Lignocaine belongs to a group of medicines known as local anaesthetics. It works by temporarily blocking the pathway of pain signals along nerves. Pain is caused by the stimulation of pain receptors at the ends of nerves. The stimulation causes sodium to enter the nerve ending, which causes an electrical signal to build up in the nerve. When this electrical signal is big enough, it passes along the nerve to the brain, where the signal is interpreted as pain. works by stopping the sodium entering the nerve ending at the site of the pain. This prevents an electrical signal building up and passing along the nerve fibres to the brain. In this way it causes numbness and relieves pain at the area it is applied to.

Lidocaine/Lignocaine is readily absorbed from mucous membranes and damaged skin producing rapid, local anaesthesia in these areas. Absorption from intact skin is poor. The rate of absorption and amount of dose absorbed is dependent upon concentration, the total dose administered, the specific site of application and the duration of exposure.
Lignocaine is metabolised rapidly by the liver, with both metabolites and unchanged drug excreted by the kidney. Approximately 90% of lignocaine is excreted as metabolites and less than 10% is excreted as unchanged drug. Excessive blood levels of lidocaine may cause changes in cardiac output, total peripheral resistance and mean arterial pressure. These changes may be attributed to a direct depressant effect of the anaesthetic agent on various components of the cardiovascular system. The pharmacological/toxicological actions of the metabolites are similar to, but less potent than those of lignocaine. The plasma binding of lignocaine is dependent on drug concentration, and the fraction bound decreases with increasing concentration.
At concentrations of 1 to 4 microgram free base/mL, 60 to 80% of lidocaine is protein-bound. Binding is also dependent on the plasma concentrations of the alpha1-acid glycoprotein. It crosses the blood brain and placental barriers.
Elimination: The excretion of unchanged lidocaine and its metabolites occurs predominantly via the kidney with less than 5% in the unchanged form appearing in the urine . The renal clearance is inversely related to its protein binding affinity and the pH of the urine . This suggests by the latter that excretion of lidocaine occurs by non-ionic diffusion .
Pregnant: Contact your doctor before taking this.

Apply gel as necessary to the affected area. Allow three to five minutes for the anaesthetic to take affect.