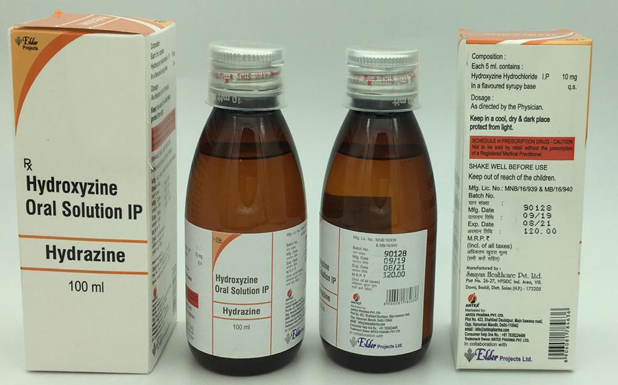 Each 5 ml contains:
Hydroxyzine Hydrochloride IP 10 mg
Hydroxyzine is a first-generation histamine H1-receptor antagonist of the dephenylmethane and piperazine classes that exhibits sedative, anxiolytic, and antiemetic properties .Hydroxyzine is used to treat itching caused by allergies. It is an antihistamine and works by blocking a certain natural substance that your body makes during an allergic reaction. It may also be used short-term to treat anxiety or to help you feel sleepy/relaxed before and after surgery.
Hydroxyzine is indicated for the symptomatic relief of anxiety and tension associated with psychoneuroses, and as an adjunct in organic disease states in which anxiety is manifested. It is also indicated in the treatment of histamine-mediated pruritus and pruritus due to allergic conditions such as chronic urticaria.

The H1 histamine receptor is responsible for mediating hypersensitivity and allergic reactions. Exposure to an allergen results in degranulation of mast cells and basophils, which then release histamine and other inflammatory mediators. Histamine binds to, and activates, H1 receptors, which results in the further release of pro-inflammatory cytokines, such as interleukins, from basophils and mast cells. These downstream effects of histamine binding are responsible for a wide variety of allergic symptoms, such as pruritus, rhinorrhea, and watery eyes.

Hydroxyzine blocks the activity of histamine to relieve allergic symptoms such as pruritus. Activity at off-targets also allows for its use as a sedative anxiolytic and an antiemetic in certain disease states. Hydroxyzine is relatively fast-acting, with an onset of effect that occurs between 15 and 60 minutes and a duration of action between 4-6 hours. Hydroxyzine may potentiate the effects of central nervous system (CNS) depressants following general anesthesia - patients maintained on hydroxyzine should receive reduced doses of any CNS depressants required.

Absorption: The absolute bioavailability of hydroxyzine has not been ascertained, as intravenous formulations are unavailable due to a risk of hemolysis.Hydroxyzine is rapidly absorbed from the gastrointestinal tract upon oral administration,reaching its maximum plasma concentration (Tmax) approximately 2 hours following administration.
Distribution: The mean volume of distribution is 16.0 ± 3.0 L/kg. Higher concentrations are found in the skin than in the plasma
Metabolism: Hydroxyzine is metabolized in the liver by CYP3A4 and CYP3A5. While the precise metabolic fate of hydroxyzine is unclear, its main and active metabolite , generated by oxidation of its alcohol moiety to a carboxylic acid, is the second-generation antihistamine cetirizine. Hydroxyzine is likely broken down into several other metabolites, though specific structures and pathways have not been elucidated in humans.
Elimination: Approximately 70% of hydroxyzine's active metabolite, cetirizine, is excreted unchanged in the urine. The precise extent of renal and fecal excretion in humans has not been determined.
Hydroxyzine is contraindicated in patients with a prolonged QT interval. It is contraindicated for patients who have shown a previous hypersensitivity to any component of this medication. Pregnancy: Contact your doctor before taking this.