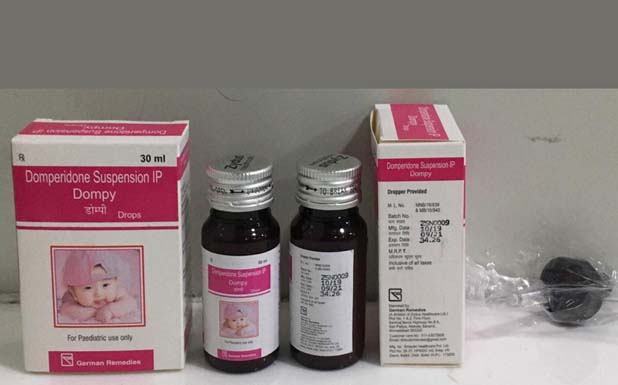 Each 5 ml suspension contains:
Domperidone IP                    1 mg
It is an antiemetic and a prokinetic medicine. It works by blocking the action of a chemical messenger in the brain which causes the feeling of nausea and vomiting, as well as increasing the movement or contractions of the stomach and intestines, allowing food to move more easily through the stomach.

Domperidone is a dopamine-receptor blocking agent. Its action on the dopamine-receptors in the chemo-emetic trigger zone produces an anti-emetic effect.
Domperidone does not cross the blood-brain barrier to any appreciable degree and so exerts relatively little effect on cerebral dopaminergic receptors.
Domperidone has been shown to increase the duration of antral and duodenal contractions, to increase the gastric emptying.

Absorption: Domperidone is rapidly absorbed, with peak plasma concentrations approximately 1 hour after oral administration.
The absolute bio-availability of oral domperidone is low (approximately 15%) due to first-pass hepatic and intestinal metabolism.
Protein binding: Domperidone is 91 - 93% bound to plasma proteins.The plasma half-life after a single oral dose is 7 - 9 hours in healthy subjects but is prolonged in patients with severe renal insufficiency.
Metabolism: Domperidone undergoes rapid and extensive hepatic metabolism by hydroxylation and N-dealkylation. In vitro metabolism experiments with diagnostic inhibitors revealed that CYP3A4 is a major form of cytochrome P-450 involved in the N-dealkylation of domperidone, whereas CYP3A4, CYP1A2 and CYP2E1 are involved in domperidone aromatic hydroxylation.
Elimination: Urinary and faecal excretion amount to 31% and 66% of the oral dose, respectively. The proportion of drug, excreted unchanged is small (approximately 1% of urinary and 10% of faecal excretion).